It’s got all the cultural appeal of a bigger city without the usual pressures or drawbacks of urban living. 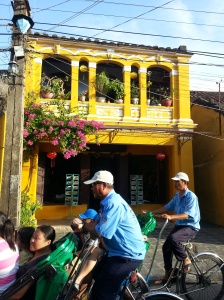 I would also describe Hoi An as a fairly upmarket town. If you were going to Asia for the first time and were a bit nervous, Hoi An would be very easy on you. It’s also IMO a great place for a family holiday – safe, clean, laidback, lots to do.

You may hear that it’s very ‘touristy’ and it is, but, hey, tourists flock to places because they’re special and you can’t have it all to yourself.

Solo in Hoi An You can travel solo anywhere and Hoi An is super safe. But it’s so romantic and charming, with such a holiday feel to it, that I felt a bit sorry for myself when I first arrived solo; it’s just not the kind of place where you want to spend time alone. The whole atmosphere is very social. So when my friends turned up a few days later, I was thrilled and I started to enjoy Hoi An so much more. If you’re travelling solo, I’d say, try and organise to meet some fellow travellers there. As you meet people on your journey everyone will be going to or coming from Hoi An so just bear that in mind.

Accommodation
I read that the city of Hoi An has banned hostels from opening up; they probably don’t want it to turn into a backpacker Mecca and want to preserve its local character. Maybe this is why the hotels offered pretty good value. As it happened, I got a great deal on a really beautiful hotel with amazing staff and four star+ luxury for the price of three star (30USD per night, low season).

This was my favourite hotel from my whole trip and I want everyone to know about it. (After my first night, some friends came down, took a look around and booked in straight away.) It’s the Vinh Hung Library Hotel, 96 Ba Trieu.
First of all, they really do have a library in the lobby area! And it’s so beautifully adorned that you’ll feel very comfortable lounging around reception, especially if you are travelling solo.

The staff seem genuinely eager to take care of you and even though I tipped well they never hovered around for a tip. They were super but I never felt the pressure to tip -this was very refreshing as the Vietnamese will TELL you to tip them or that the tip is too small! (I know this is the norm for Americans but for the rest of the world it can be quite annoying.)

The decor was tasteful and creative down to every minor detail tiling, furnishings, fabrics. (Hotels can be so bland and impersonal but Vinh Hung had a very personalised style.) Even the TV cables were completely covered with a type of hessian fabric. They’ve also got a spotless roof-top swimming pool with staff on standby to take your orders for drink and snacks. It’s a five-minute walk from everything.
The buffet breakfast was the best of my whole trip – yoghurts in glass pots, coffee in big cups, cereals, delicious fresh fruits and all the usual cooked breakfast options. Again, detail was the word of the day. As I had an early check-out, I was so sorry I would miss my last breakfast but the receptionist organised a take-out breakfast before I even had to ask.

Backpackers:
Hoi An Salute Hotel – I also spent two nights here before Vinh Hung. It’s a hotel but you can get a single sex dorm if you’re on a tighter budget. It’s not bad – the hotel section is used by families and ‘grown ups’ while the dorm side is for backpackers. Everyone has equal access to a very nice pool and buffet breakfast (I think I paid extra for the breakfast?).

There’s NO privacy in the dorm, as in, the outer wall is all glass! I wouldn’t really recommend the single room but I reckon the family accommodation/bigger rooms are quite nice. The staff were very helpful and when I emailed in advance with a query the manager was really prompt to reply.

Minor scams
Hoi An is very safe but I’ve heard of a few minor scams. You DO need to buy a ticket to cross the Japanese Bridge and that ticket covers entry to all the historic houses and pagodas in Hoi An. However, some old ladies try to charge tourists to cross a completely different bridge which does not charge a fee at all. The ladies with the fruit baskets can be a bit tricky as well but harmless enough in the main.

Food, glorious food
Oh Lordy, I ate so well in Hoi An. And to add to the pleasure, some girls I’d met at Ha Long Bay turned up for the last few days so I was dining in great company as well.
Now, because I’m not a food critic, I don’t go into detail about the dishes themselves. Let’s leave that to professional critics who know what they’re talking about. However, I LOVE my food and I’ve been told that my recommendations are pretty reliable.

So these were my foodie highlights in Hoi An:
Bale Well– was recommended to me by locals but everyone everywhere has caught on. (Pronounced ‘Ba Lay’) Fantastic local food on a very low budget. They don’t bring you a menu. You sit down, they take your drinks order and then they bring you a tray with a ton of meat dishes – pork satay, rice pancakes, spring rolls, grilled pork, salads. I can still taste them.

Ganesh, 24 Tran Hung Dao. Indian food, it came highly recommended and it did not disappoint. Best Indian I’ve had in ages, really great value, spotless, ambient environment. Lovely staff. We ordered way too much – got a bit carried away – but we diligently soldiered on with our gastronomic duty.